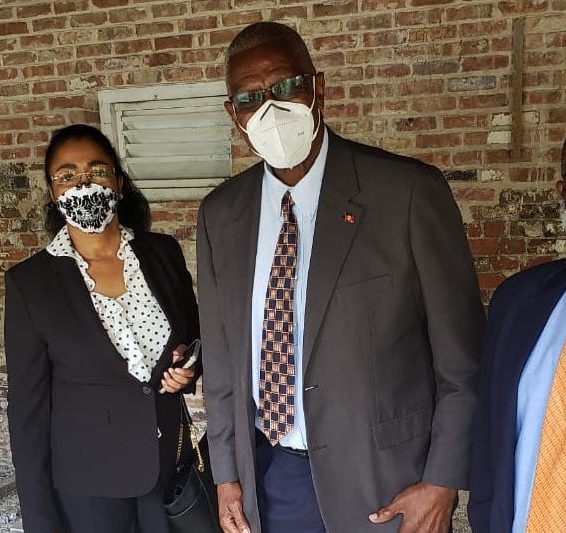 Following a recent visit to Government House by Professor Sir Hilary Beckles, Vice-Chancellor of the University of the West Indies (UWI), an agreement has been reached for The UWI — one of the most prestigious tertiary institutions in the region and throughout the entire world – to provide technical assistance.

“This would involve the interpretation of the history of the distinctively architectural Government House, as it transitions from its intended residential use to a public museum and tourist attraction”, said H.E. Sir Rodney Williams, Governor General of Antigua and Barbuda. “The theme would traverse our colonial past – from slavery, to emancipation and ultimately to the triumph of an independent nation”.

H.E. Lady Williams added, “We have been very fortunate to have spoken with historical luminary Dr. Reginald Murphy, who has provided extremely useful insight. Individuals like Flora Jacobs, daughter of the last Governor and first Governor General of Antigua and Barbuda, Sir Wilfred Jacobs, has also provided history in living colour, as she actually resided in Government House as a child.”

UWI Consultant, Mr. Kevin Farmer, who presently serves as the Deputy Director of the Barbados Museum and Historical Society, toured the facility in late October and held extensive discussions with Their Excellencies Sir Rodney Williams, Permanent Secretary Paula Frederick-Hunte and Private Secretary Anne Jonas, as a precursor to the preparation of a detailed guide document.

The Linbury Trust (UK) and the Calvin Ayre Foundation have donated significant funding to the project to date. Other benefactors include Caribbean Alliance Insurance (Mr. Ernest Letby OBE) and Mr. Aziz Hadeed, CBE.

Government House has hosted volunteers from universities in Canada and the United States. Site archaeological digs suggest that the West Wing may be the oldest slave quarters in the Eastern Caribbean region.