Wondering How Many People Are Living With HIV In The Caribbean?

Empty Shelves As Crisis In Martinique Drags On 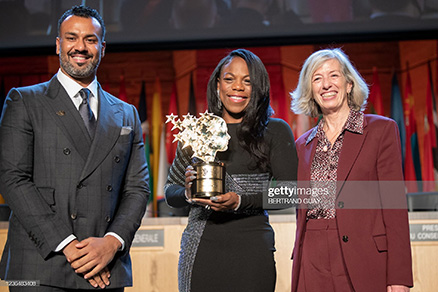 3 weeks ago·4 min read
ShareTweetPinShare
Home
Caribbean News
This Caribbean Immigrant Has Gone From Track And Field To 2021 Global Teacher Winner
The content originally appeared on: News Americas Now
US teacher Keishia Thorpe poses with UNESCO Assistant Director-general for Education Stefania Giannini (R) and the son of the founder of the Varkey foundation Jay Varkey (L) after winning the Global Teacher Prize 2021 at the UNESCO headquarters in Paris, on November 10, 2021. (Photo by BERTRAND GUAY / AFP) (Photo by BERTRAND GUAY/AFP via Getty Images)

1: She is Keishia Thorpe, who fled poverty and violence as a child from Jamaica, and encountered racism as a black immigrant in the US where she had come on a track and field scholarship.

2: Keeping a growth mindset and focused on her goal, she not only graduated at the top of her class, but in her spare time volunteered as tutor at a nearby inner-city school, having seen how black students were disproportionately underrepresented and their schools under-resourced. Struck by the U.S. having a growing diverse student population of 49.8% and a teaching force of 87% Caucasian, together with the inequity she saw students experience, led her to become a teacher.

3: After college, she began teaching English in Title I public schools, where she could help students from disadvantaged backgrounds realize and maximize their potential.

4: The single mother teaches 12th grade at the International High School at Langley Park in Prince George’s County, Baltimore, and was selected from more than 8,000 nominations and applications from 121 countries around the world for the prize, the foundation said. Thorpe said she was grateful to the foundation for putting teachers in the spotlight and telling their stories.

“Education is a human right, and all children should be entitled to have access to it,” Thorpe said during a ceremony streamed online. “So this recognition is not just about me, but about all the dreamers who work so hard and dare to dream of ending generational poverty. This is to encourage every little Black boy and girl that looks like me, and every child in the world that feels marginalized and has a story like mine, and felt they never mattered.”

5: To prepare her students for college, Keishia Thorpe teaches English to 12th-grade students who are English language learners at the International High School Langley Park, Bladensburg, Maryland, United States, a school where over 85% are Hispanic students and 95% identify as low-income. Thorpe redesigned the 12th grade English curriculum to make it culturally relevant to her students, who include first-generation Americans, immigrants and refugees, the foundation said. She also assists students with applying for college and scholarships, helping them win $6.7 million in scholarships in the 2018-2019 school year, according to the foundation.

6: Her commitment to mentoring students – all immigrants themselves – and helping them find paths to higher education saw her named National Life Group’s ‘Lifechanger of the Year’ Grand Prize Winner for the 2018-2019 School Year, an award for teachers who inspire and go above and beyond for their students. Her 16 years of teaching have seen her dedicate herself to mentoring college applicants and student-athletes, as well as expanding access to subsidized testing, financial aid, and full scholarships.

A USD 19 Billion Shot In The Arm For The Caribbean

7: Aside from delivering life-changing career pathways for her own students, Keishia is also a teacher mentor to new teachers, designing and sharing best practices with her team and Professional Learning Community. Over the years, she has contributed to public debates on the teaching profession at State Board of Education meetings and testifies on teacher retention and funding; also attending and participating in Congressional Black Caucus events; Shared Vision Conference-for leaders in education; the American Federation of Teachers lobby and public events; Save our School Conference advocating for minority students and social justice in education; Community Schools and Chancellor’s Community Forums representing her school; lobbies and works with teachers unions in open forums advocating for higher teacher retention rates and fair evaluation systems.

8: She has served with the Washington Teachers Union, and as American Federation of Teachers’ Teacher Leader Ambassador, encouraging teachers to dive into action research to solve education issues in their schools and communities while improving student learning, and to propose recommendations to local and federal institutions. As leader of the Local School Advisory Team, she helps with the school’s yearly budget allocation and has joined political campaigns encouraging teachers to vote.

9: Her efforts have won her international praise and recognition and she additionally demonstrated that her caring goes way beyond the classroom, as co-founder of US Elite International Track and Field, Inc., a non-profit offering ‘at risk’ student-athletes across the globe an opportunity to use their talents as a vehicle to access scholarships to earn a college diploma debt-free. Even though she is a single mother, Thorpe has stayed after school at her workplace on many evenings, assisting a great number of her students with applying to colleges. As a result, she was honored as the district’s Teacher of the Year Runner-up for 2018. She has also earned two mission awards from her school for preparing students for college and contributing to the school’s mission. She still stays in touch with and is a mentor to some of her students who are now in college.

10: She is also founder of the Hope Beyond Distance Foundation and Food4Change, a program offering support services to immigrant students and their families. Maryland Governor Larry Hogan awarded Thorpe the Medal of Excellence for her work in influencing equitable policies in education. She was also named National Life Changer of the Year for 2018-2019.