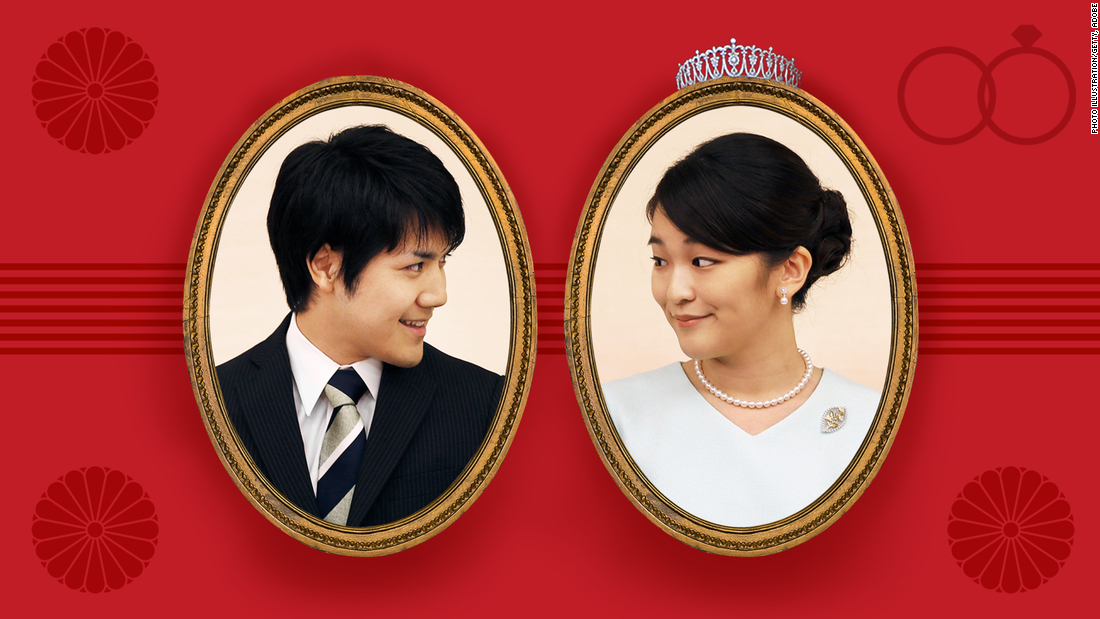 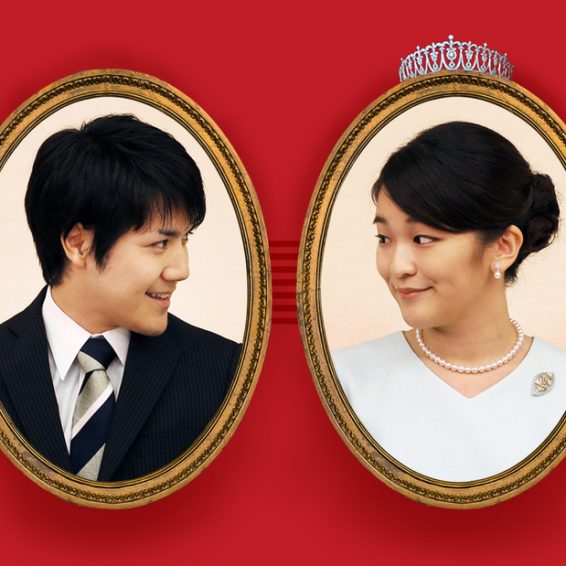 Not everyone approves of this princess’ wedding. She’s going ahead with it anyway

1 month ago·8 min read
ShareTweetPinShare
Home
World News
Not everyone approves of this princess’ wedding. She’s going ahead with it anyway
The content originally appeared on: CNN
But since Japan’s Princess Mako and Kei Komuro announced their engagement in 2017, their union has been mired in scandal, public disapproval and tabloid frenzy.
Some Japanese don’t consider the commoner son of a single parent to be worthy of a princess. Their disdain was confirmed last month when he arrived in Japan for their October 26 wedding sporting long hair tied in a ponytail.
Tabloids ran photos of 30-year-old Komuro’s ponytail from every angle, with some comparing it to a samurai’s top knot. On social media, some tweeted support for his new look, while others said it was unsuitable for the groom of a royal bride.
A ponytail may not cause a stir in the West, but people in Japan are expected to reflect their status and role through their actions and words. People saw the ponytail as a sign Komuro wasn’t conforming to social expectations, according to Hitomi Tonomura, a women’s and gender studies professor at the University of Michigan.
Read More
“If he were a singer or artist, it would be fine, but people think he is not ‘lawyer-like’ nor looking appropriate for a person who will wed a royal woman,” she added.
Komuro cut off his ponytail ahead of Tuesday’s wedding. But that wasn’t the end of it.
While most royal weddings are marked by pomp and circumstance, this one will be a muted affair in a registry office followed by a news conference, then Mako’s departure from the royal family and a move to the United States. Some royal watchers say it’s a sign of the times for minor royals, who are no longer content to fit bygone rules about what they can do — and who they can marry.

Unfit for a princess?

Princess Mako, who turned 30 on Saturday, is a niece of Emperor Naruhito and grew up in the 1990s within the confines of the Imperial household.
As a child, the first-born grandchild of the former emperor and empress quickly won over the public. “Her manners are impeccable. People viewed her as the perfect royal,” said Mikiko Taga, a Japanese royal journalist.
Princess Mako had been expected to attend the private Gakushuin University with other members of the wealthy elite, but she opted to study a bachelor’s degree in art and cultural heritage at the International Christian University in Tokyo.
It was there she met Komuro, a man born just three weeks before her in October 1991, to a family of much more modest means.
Raised by a single mother, Komuro lost his father and both grandparents at a young age, according to local media reports. After graduating from the International Christian University in 2014, he worked in a law firm in Tokyo, before winning a scholarship to study law at the Fordham School of Law in New York.
Princess Mako’s study took her in another direction.
In 2014, she went to Leicester University in the United Kingdom as an exchange student before graduating with a master’s degree in art museum and gallery studies.
Soon after, the couple reunited and in 2017 announced their engagement to an enraptured Japanese public.
At a crowded news conference, the princess said she had been attracted by Komuro’s “bright smiles like the sun” and had learned over time that he was “sincere, strong-minded, a hard worker with a big heart.”
Japanese media dubbed him the “Prince of the Sea,” after the character he played in a beach tourism campaign for the city of Fujisawa, south of Tokyo.
All seemed to be going well, but then came the first sign of troubled waters.
Centuries ago, women ruled Japan. What changed?
The couple had planned to marry in 2018, but their wedding was pushed back. The Imperial household said the delay was due to a “lack of preparation,” but others suspect it was due to reports Komuro’s mother failed to pay back $36,000 she borrowed from her former fiance.
Komuro disputed the account, even releasing a 28-page statement earlier this year, stating his mother believed the money was a gift and that he would pay to settle the dispute. But tabloid gossip had already spiraled to dissect every aspect of his family and his life; some reports even painted him as an untrustworthy gold-digger.
“Although, in the United States, we would think mother’s business is unrelated to Komuro Kei, an adult man, people in Japan considered this to be problematic and transformed him from a nice, kind, truthful young man to a calculative opportunist who was after prestige and possibly money,” said Tonomura, the gender studies expert.

A chance meeting at university is not the normal path to marriage for a Japanese royal.
Kaori Hayashi, a media studies expert and executive vice president of the University of Tokyo, said royal partners are usually carefully chosen from within traditional circles the Imperial family socializes with.

“In Japan, there is also an intense misogyny that debases single mothers morally and economically”Hitomi TonomuraUniversity of Michigan

Additionally, in Japan, the perception that single mothers are incapable of raising proper children, still exists, added Tonomura, the gender studies expert.
“In Japan, there is also an intense misogyny that debases single mothers morally and economically,” she said.
Some say disapproval of Komuro’s upbringing says more about gender inequality in Japan, which has the largest gender gap of all G7 countries.
“There is a traditional sort of sex-segregated role for men and women that plays out not only in the royal family, but in many institutions here,” said Nancy Snow, a professor of public diplomacy at the Kyoto University of Foreign Studies.
Komuro’s mother’s alleged financial trouble has contaminated ardent royalists’ image of the royal house, which ideally should appear symbolically pure and exist for the spiritual well-being of the Japanese people, Tonomura said.
That view, for instance, is held by Kei Kobuta, a royal affairs YouTuber, who organized a march in Tokyo attended by about 100 people last Saturday. He said many royal watchers like himself consider Princess Mako like a sister or daughter who has had made the wrong choice.
“There are so many doubts and misgivings about Kei Komuro and his mom, and people fear the image of the royal family will be sullied,” said Kobuta.

The years of speculation and slurs have taken their toll on Princess Mako.
Earlier this month, the palace disclosed that she suffers from complex post-traumatic stress disorder (PTSD).
The princess “feels pessimistic and finds it difficult to feel happy due to the persistent fear of her life being destroyed,” Princess Mako’s psychiatrist, Tsuyoshi Akiyama, director of NTT Medical Center Tokyo, told media at the Imperial Household Agency.

“(Princess Mako) finds it difficult to feel happy due to the persistent fear of her life being destroyed”Tsuyoshi AkiyamaDirector, NTT Medical Center Tokyo

The princess isn’t the first Japanese woman of the royal family to feel the pressure of Imperial life. Japan’s Empress Masako married Emperor Naruhito in 1993, abandoning a high-profile diplomatic career for life in the royal household. The transition was difficult for Masako, who long battled with an illness doctors described as an “adjustment disorder.”
“Each case of a female member of the royal family struggling with mental illness has involved different circumstances,” said Ken Ruoff, director of the Center for Japanese Studies at Portland State University and author of “Japan’s Imperial House in the Postwar Era, 1945-2019.”
“In the case of then Crown Princess Masako, it revolved almost entirely around her being blamed for not producing the requisite male heir,” he added.
“Fast forward to the case of Princess Mako, and it revolves entirely around her marriage being subjected to a level of scrutiny that few marriages are subjected to, especially when you consider that she’ll be exiting the royal house as soon as she is formally married.”
Under Japanese law, members of the royal household must give up their titles and leave the palace if they marry a commoner. As there are only 18 members of the Imperial family, Princess Mako isn’t the first to leave. The last royal to do so was her aunt, Sayako, the only daughter of Emperor Akihito, when she married town planner Yoshiki Kuroda in 2005.
As a woman, Princess Mako wasn’t in line to the throne — Japan’s male-only succession law prevents that from happening. Her role in royal life was to support her male relatives.
As a departing royal, Princess Mako was entitled to a one-off million-dollar payment, but in an effort to appease a disapproving public, she has decided to forgo it.

“It’s a warning to the Imperial house. I mean, she clearly got fed up”Ken RuoffPortland State University

After the wedding, she’ll move to New York City where Komuro works at a law firm.
“This is a dramatic exit,” Ruoff said. “It’s a warning to the Imperial house. I mean, she clearly got fed up.”

Princess Mako and Komuro’s retreat from the royal spotlight is being compared to another famous couple — Meghan Markle and Prince Harry.
Markle’s engagement to Britain’s Prince Harry sparked controversy when it was first announced in November 2017. Some believed a biracial, divorced American actress had no place within the British royal family.
Over time, the British tabloids’ coverage of the couple became so toxic that Harry issued a statement in November 2016, condemning the “wave of harassment” Meghan had to endure. Eventually, the couple jumped ship, leaving the British royal family in January 2020.
But while Princess Mako’s “dramatic” exit from the royal family is somewhat comparable to “Megxit” — the term for the British couple’s departure — Ruoff, the historian, said the similarities end there.
“British royal family members grow up among great wealth. And they also spend a lot of time directly raising money for very various charitable causes, so know how it works. So when Harry and Meghan went to the US, by telling various stories about the royal family, they managed to make millions and millions of dollars, all the while draping themselves in feel-good, left-wing causes,” Ruoff said.

“I would predict there’s almost no way that Mako and her future husband are going to behave like that after they get married. In fact, I think what’s going to happen is they’re just going to disappear.”
According to Taga, the royal affairs journalist, the days of asking someone to fulfill the duties they were born with are coming to an end.
“That’s why I think it’s significant that two different royals from East and West are choosing to live the way they want,” she said.
“It marks the beginning of a new era.”