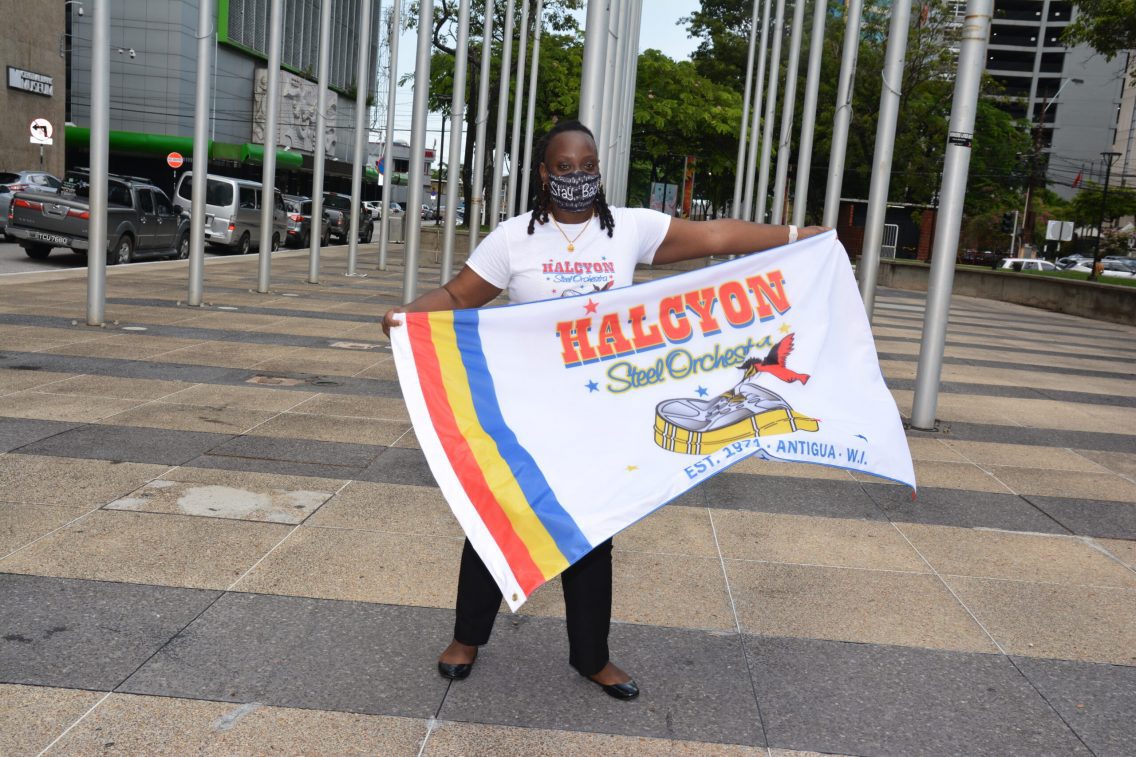 Legendary Antigua and Barbuda-based Halcyon Steel Orchestra is one of seven musical outfits from around the world added to the cast for this year’s presentation of the 2nd Annual Barry Mannette Steelpan Flying High Global Flag Exhibition 2021.

A presentation by media company Steelpan Authority Global (SPAG) and manufacturer Steelpan Authority Instruments (SPAI), the original concept which features official symbols of steel orchestras emblazoned on 3 by 5 fabric and hoisted as flags, is now taking place in Trinidad and Tobago’s capital Port-of-Spain.

Venue for Steelpan Flying High, which began on August 17 and continues through October 31, 2021, is the Port-of-Spain City Corporation flag pole area opposite the Central Bank of Trinidad and Tobago (CBTT).

Staging of the project is also made possible by the Mayor and Council of the City Corporation and the leadership of the CBTT.

The decision by the leadership of Halcyon Steel Orchestra to write itself into history through its participation in the original showcase, comes as the celebrated Antigua music outfit observes its golden anniversary, as a well constituted community and national organisation, and a “Champion of the Steelpan,” globally.

At this instalment of the project Halcyon is joined by newcomers:

When combined with the original cast of global steelbands from the inaugural instalment of Steelpan Flying High, it brings to eleven, the number of countries represented, for a total of 21 orchestra flags on show.

Other partners involved in the revolutionary project are:

“Flying High is a concept that illustrates both cultural and national pride. The original concept showcases the beautiful pieces of artwork, that are steelband logos,” said SPAG team leader Sean Nero.

August 2021 marked the 29th anniversary since the steelpan was declared the National Musical Instrument of the Republic of Trinidad and Tobago.

The decision to heighten the profile of the musical instrument was made by the government of the late Patrick Manning on August 30, 1992. In his Independence Day message, the late Prime Minister declared the steelpan would become the national musical instrument of the twin-island Republic. To mark the occasion, Chaconia Medals (Gold) were bestowed onto Renegades and Desperadoes Steel Orchestras for excellence in culture.

Owen Serrette, manager of four-time National Panorama champion Harmonites Steel Orchestra – a senior officer in the public service back then-was at the helm of Pan Trinbago.

Out of the new respect bestowed onto the steelpan community, Serrette and his executive conceptualised an observance to be known as Steelband Week, which morphed into Steelband Month.

Nero said, “It seems fated, that more than two-and-a-half decades later, steelbands have set a new course, utilising the Flying High platform, where the steelband world comes together without striking a musical note.”

He added, “And, at a time when the global entertainment sector struggles to bounce back, due to the impact of the global health pandemic Covid-19, a presentation such as Flying High keeps the steelpan in focus, as activities to enable public attraction and participation have shifted to another calendar.

For the team at Steelpan Authority hoisting of these flags, which coincide with Steelpan Month represents three pillars:

Salute the legends who paved the way (too many of them unsung heroes);
Recognises the tremendous work being done by those in the present space and thirdly;
Symbolise a source of strength for future exponents of the artform, to advance the cause.

Across the world, there exist royalty. There are dynasties. It should, therefore, come as no surprise that the steelpan community has its own. One such house of royalty is the Mannette dynasty.

The Mannette name in the sphere of culture, creativity and innovation has never been in question. You must have heard the name Vernon “Birdie” Mannette of Invaders fames and of course his brother Elliot “Ellie” Mannette.

In recognising the family’s storied legacy, the Steelpan Authority proudly present the heir of the Mannette throne: Barry Mannette.

Very much like his father Vernon and uncle “Ellie” Barry is a nurturer. Although, he did not formalise a career along the line of steelpan manufacturing, as those who went before, the younger Mannette has firmly ingratiated himself into steelband culture as an educator, earning respect and winning hearts wherever he goes.

So, it is with enormous pride that team Steelpan Authority introduces Barry Mannette as the inaugural honouree of the Steelpan Flying High project.