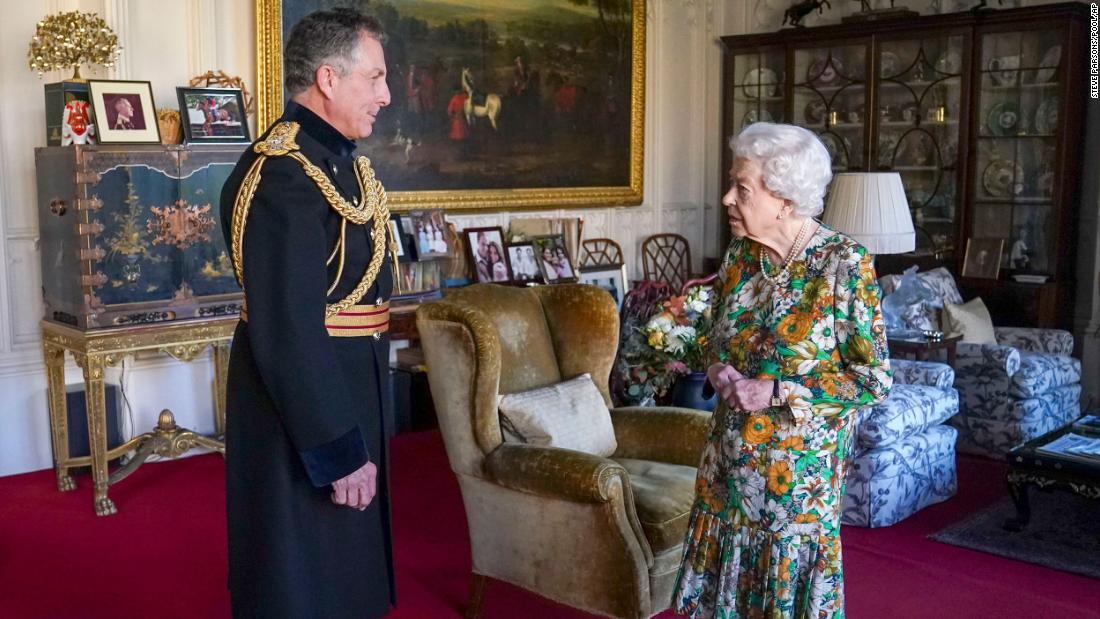 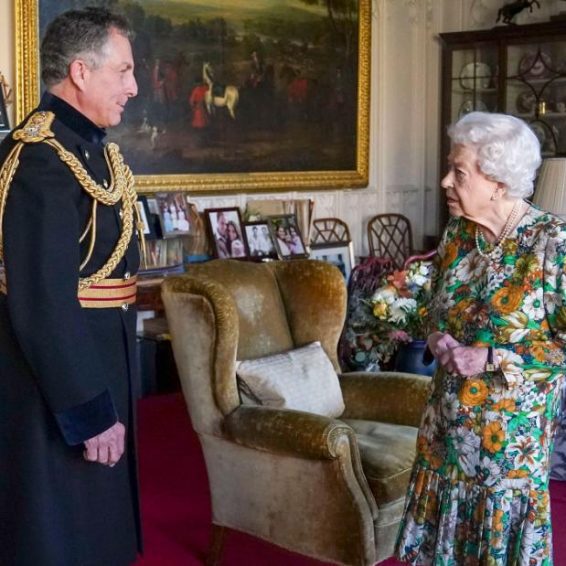 2 months ago·2 min read
ShareTweetPinShare
Home
World News
Britain’s Queen Elizabeth makes her first public appearance since spraining her back
The content originally appeared on: CNN
“Her Majesty received General Sir Nicholas Carter at Windsor Castle today upon relinquishing his appointment as Chief of the Defence Staff,” according to Buckingham Palace on Wednesday.
Dressed in an orange, green and white floral dress, the 95-year-old monarch stood to greet the outgoing general in the Oak Room at Windsor Castle.
The Queen warmly welcomed the head of the armed forces as he entered the sitting room, as one of her dogs ran towards him inquisitively. After the pair shook hands, the monarch said it was “rather sad” that he was stepping down, as they started chatting.
Family photographs of the Duke and Duchess of Cambridge, the Duke of Sussex as well as Princesses Beatrice and Eugenie could be seen on display in the background of the room, where the monarch conducts much of her business while in residence at Windsor.
Read More
The military audience took place three days after the palace revealed her regret over having to miss the service at the Cenotaph in central London. Prince Charles, who turned 73 on Sunday, laid a wreath at the war memorial on the Queen’s behalf, as in previous years.
The Queen’s decision to pull out of the service was said to be unrelated to her doctor’s recent advice to rest, a royal source previously told CNN.
British Prime Minister Boris Johnson on Sunday volunteered that the Queen was “very well” when he saw her last week.
The monarch has been forced to skip a number of engagements in the last month. She conducted her last in-person engagement on October 19 hosting a reception for business leaders at Windsor ahead of the COP26 climate conference in Glasgow. The day after, the sovereign abruptly canceled an imminent trip to Northern Ireland and spent a night in hospital for what a spokesman described at the time as “preliminary investigations.”
What happened when the royal ecowarriors descended on COP26
Since then and following her doctor’s orders, the royal household has scaled back her diary significantly. She has been mostly resting at Windsor, undertaking a few light duties by video link and phone.
She did however manage to head off for a long-planned weekend away, a royal source previously told CNN. Her mini-break had been in the diary for some time, with doctors giving her the all-clear to go to Sandringham by helicopter, according to The Mirror newspaper. She was understood to be traveling to her country estate to make preparations to welcome her family over Christmas, the report added.
Before that, Elizabeth was seen driving herself around her Windsor estate, in what will have been a reassuring sight to many royal-watchers.
“Moving forwards, especially as we move into the winter with Covid, we will see the Queen doing more zoom calls, less in-person meetings,” CNN historian and royal expert Kate Williams previously said. “But I think that as soon as the winter is over, she will be keen to get back on her feet, back out there meeting people. It’s just whether or not the doctors are going to agree with it.”

CNN has launched Royal News, a new weekly dispatch bringing you the inside track on the royal family, what they are up to in public and what’s happening behind palace walls. Sign up here.